.​Dedicated to the conservation and care of turtles and tortoises.

If you find an injured wild turtle, contact an experienced exotic pet veterinarian or licensed wildlife rehabilitator near you.  ​

* For information on finding an experienced exotic animal vet or licensed wildlife rehabilitator, see listings on the Healthcare Resources page. 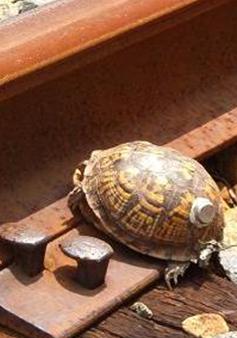 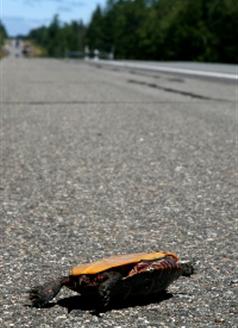 Each year, countless turtles  are killed or injured crossing roads as they're struck by vehicles.  In the Mid-Atlantic region, these are often box turtles. Roadway mortality is thought to be a major factor in turtle population declines throughout the United States. If you help a turtle cross a road, you're making a valuable contribution to the preservation of North America’s turtles. Even with the best intentions though, many motorists who stop to help often don't know what to do when they spot a turtle in a dangerous roadway. Here's some information to consider when you see a turtle crossing a busy road.

Why did the turtle cross the road?

​Unlike the chicken, turtles aren't just trying to get to the other side, but actually have someplace to go. During the early summer, many female turtles cross roads bearing eggs, moving toward familiar nesting areas. Semi-aquatic turtles can have seasonal movements between different wetland habitats. Hatchlings in roadways can be looking for ponds and backwater to serve as their permanent home.

What's the right way to help a turtle cross a road?

Why can't I just move a box turtle to a safer place that needs more turtles?

​Susan Hagood of the HSUS shared this explanation: "Though that may seem like a solution, box turtles are nature's homebodies. They often spend their entire lives in an area no bigger than a couple of acres, where they know every nook and cranny—where the best spots are for finding food or for water on hot summer days or for safe digs to wait out the long winter months. If taken from their homes and released somewhere else, they use their amazing ability...to (attempt to) head home, facing all the hazards that such a journey holds. What's more, the genetic and disease implications of moving box turtles around are completely unknown."

Train tracks pose a BIG problem to many turtles, which seem unable to escape them once they cross over onto the tracks. This impacts turtles of all sizes - even the largest species like snappers and Red-bellies. The danger is not that they're run over, but instead is caused by the height and shape of the tracks which trap the turtles, causing them to rapidly succumb to overheating and desiccation. When you consider how many thousands of miles of tracks exist, the scope of the problem becomes clear!

Check out this video about one creative solution to make train tracks safer for turtles!