.​Dedicated to the conservation and care of turtles and tortoises. 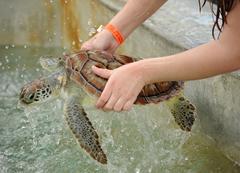 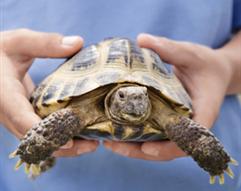 Click here to view a presentation by MATTS herpetologist Sandy Barnett, with examples on how to handle turtles, including those with aggressive biting habits.
​

DON'T pick up a turtle by the tail (that includes snappers!) It can dislocate (separate) the bones in the tail, which is very painful for the turtle.

DON'T turn a turtle quickly. A quick flip, swing or twist can pull painfully on organs and connecting tissue. You don't want to move a turtle around so fast that its organs have to play "catch up!" It should take at least two full seconds to turn an animal over, counting: "one-thousand one, one-thousand two."

DO rotate the animal head over tail (or tail over head) rather than side over side if you want to look at the plastron (bottom shell). (Clearly this may not be possible with very big or aggressive turtles where you need to keep the head pointed away from you at all times.) Turning a turtle side over side can cause the intestine to twist, which is painful and can kill your turtle.

DON'T complete the circle! When you need to turn a turtle over, don't put the animal through a full 360 degrees of revolution (a complete circle), just 180 degrees to minimize the chances of twisting the intestines.

DON'T keep a turtle on its back any longer than absolutely necessary. Such a position is unnatural and stressful to the animal. Turtles stuck on their back feel out of control, vulnerable to predators. All of their instincts tell them to turn over, or if that isn't possible, to draw into their shell for some protection. A turtle on its back isn't a happy camper!

DON'T gesture with your hands while holding a turtle. Remember, it's a living creature and may suffer stress from being waved around. If you need to move your hands, avoid quick hand movements or changes in direction; move slowly and smoothly.

DO put the animal down as gently as possible to avoid injury to the legs or internal organs.

DO remember that a turtle's shell is living tissue, and is quite sensitive to touch. Avoid tapping on it, and never strike the shell against another surface. Aside from possibly injuring the shell, it can be stressful on the turtle.

DON'T hold a turtle with a soft shell (young turtles, species of turtles with naturally soft shells, turtles with diseases that make their shell soft) by the back edge of the shell. It can cause permanent damage. Try to apply as little pressure as possible to the shell when restraining the animal. Keep in mind that it generally requires less pressure to get a good grip when you use a two-handed hold than when you use a one-handed hold. Support the underside well.

DON'T put your fingers between the top and bottom shell at the front or back end of a box turtle. These turtles can box up quite tightly, pinching your fingers.